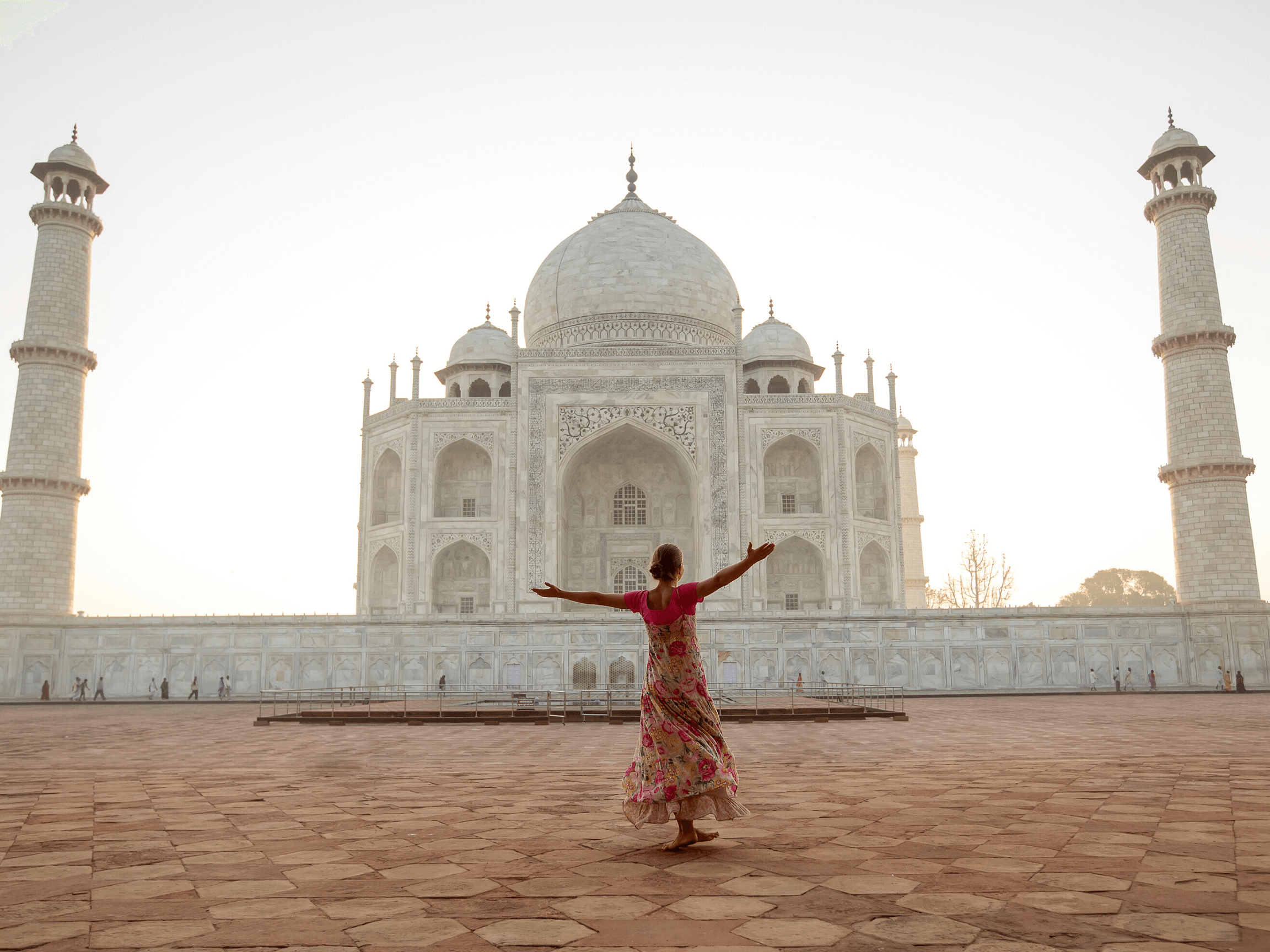 Between the towering Himalayas and Kerala’s beach fringed tip, there’s millennia’s worth of history to discover, think Taj Mahal and Varanasi, and friendly locals of all creeds and cultures to meet.
The north of the country is the India of many people’s dreams, a colourful kaleidoscope of temples, palaces, spectacular scenery and wonderful wildlife. Search for tigers in Ranthambore National Park, be starstruck by the romance of the Taj Mahal or explore the fascinating remnants of past empires from the Moghuls to the British Raj.
Fully Inclusive covering all meals, International flights and current taxes, domestic transportation, 3*-4* Accommodation including the Hilton Hotel, Tigeress Hotel, Royal Luxury Suite, Double Tree by Hilton and you will be touring with professional guides along the way!

What Does The Price Include?

On arrival, you will be met and transferred to your hotel for check in. Enjoy the remainder of your day at leisure.
As the capital of India, Delhi is the third largest city with a population of approximately 18 million. Its strategic location along the north-south, east-west route has given it a focal position in Indian history and many great empires have been ruled from here. The monuments and ruins of these are scattered throughout the city, often cheek by jowl with modern structures and high-rise towers

After breakfast, you will be met at your hotel lobby for a full day of sightseeing with your guide. Start off your day in Old Delhi where you will view the Red Fort from outside before walking through Chandni Chowk, savouring the ambience of the oriental, crowded bazaar. Continue to India’s largest mosque, Jama Masjid, built in 1656 AD.

Marvel at the magnificent architecture made up of three domes, three large gates, two 40 metre high minarets made of sandstone and marble and a courtyard that can hold up to 26,000 people.

Stop by India Gate, a memorial to the Indian servicemen who died in World War I. Continue to Humayun’s Tomb (the second Mughal Emperor) built in the mid-16th-century. This tomb is the first great example of a Mughal garden tomb and was the inspiration for several monuments such as the incomparable Taj Mahal.

End your day with a visit to the always busy and jampacked Connaught Markets, where you can find linen, clothing, saris, handicrafts, jewellery, books, home wares and everything in between.

Later, visit the tomb of Idmad-ud-Daulahm a Mughal mausoleum, commonly known as the “Baby Taj”. The tomb is regarded as the inspiration for the Taj Mahal as the design and structure of the two buildings are so similar.

Agra, home to the world famous Taj Mahal. Agra rose to fame in the mediaeval period as the capital of the Mughal Empire and was beautified with gardens, waterfalls, bathhouses and canals. In modern times, the city of Agra houses a thriving carpet industry. Upon arrival check into our hotel.

The most iconic sight in India is surely the Taj Mahal and it is for this reason that most people visit Agra.

Rise early to head to the site with your local guide. Experience the Taj Mahal at sunrise to see the gentle light reflecting on the white marble walls making the building glow. Shah Jahan built this mausoleum in memory of his wife Mumtaz and it is a monument to love. Note: For admission to the main mausoleum area you are required to wear shoe covers.

You will return to your hotel for breakfast and to freshen up. You will, later, visit a marble inlay workshop and learn about the intricate skill of laying marble, similar to what you would have seen at the Taj Mahal in the morning.
Situated on the West bank of the Yamuna River is the Agra Fort. You will visit this walled compound with your local guide, founded in the 16th century by Emperor Akbar the Great. However, it was during the rule of Shah Jahan that fort took its current form with the construction of two beautiful white marble mosques.

This morning transfer to Ranthamboure, en route, you will visit Fatehpur Sikri. Located 40km from Agra, Fatehpur Sikri was built by Emperor Akbar in 1569 after it was prophesised that the then childless Akbar would have sons if he moved his capital to the site. At great expense to the empire, the capital was moved here but sadly only occupied for 14 years before slowly being deserted and ruined after Akbar left the city due to a scarcity of water. Whilst here you visit the remarkably well-preserved and graceful buildings within the Ghost City including the Jama Masjid, tomb of Salim Chisti, Panch Mahal Palace and other palaces that speak of the grandeur and splendour of the Mughal Empire at the height of its power.

The forest around Ranthambhore was once the private hunting grounds of the Maharajas of Jaipur and is one of the largest national parks in Northern India. Ranthambhore National Park is renowned for its tiger population; however, you may also come across other wild animals such as leopard, nilgai, wild boar, sambar, hyena and sloth bears.

Tigers are synonymous with India and the opportunity to observe one in the wild is often a highlight of any holiday in the country.
Start your exploration of the park by joining a shared morning and afternoon safari to catch a glimpse of these beautiful wild animals.

Please note: Photo ID is required when visiting the Park. Please ensure you bring your passport to gain entry.

This morning, you will be met and transferred by road to Jaipur.

On arrival, you will be transferred to your hotel for check in. Enjoy the remainder of your day at leisure.

Jaipur was founded in 1727 as Mughal power within India was declining. The city is now the capital of Rajasthan State and commonly called the ‘Pink City’ because of the pink paint on all the buildings in the old city area. This was apparently done to imitate the magnificent, red sandstone buildings of the Mughals and in an attempt to impress the Prince of Wales when he visited Jaipur in 1876.

You will start with a brief photo stop at the Hawa Mahal (Palace of the Winds). This is a five-story palace, which was erected in 1799 by the Sawai Pratap Singh so that the veiled ladies of his harem could observe, unnoticed, the lively street scenes below.

You will continue to visit the Amer Fort. After you arrive at the base of Amer Fort, you will take a Jeep ride that will take you all the way up to the entrance. Built from yellow and pink sandstone and white marble, you will explore the inside of the fort including visits to the Jag Mandir or the Hall of Victory, which houses the famed Sheesh Mahal.
This afternoon, you will visit the City Palace to explore the former Royal residence. Outside the gate to the Maharaja’s City Palace is Jantar Mantar Observatory, the largest stone and marble crafted observatory in the world. The observatory has 17 large instruments, many of them still in working condition.

Before returning to the hotel, you will stop for some shopping inside the walled city, where villagers from around Jaipur come to sell and trade their produce. The rest of the evening is free at your leisure

On arrival, you will be transferred to your hotel for check in. Enjoy the remainder of your day at leisure.

The origins of Udaipur are based on a legend which tells of a holy sage that Maharaja Udai Singh encountered while hunting in the foothills of the Aravalli Range in Mewar. Today, the City Palace of Udaipur is still home to Maharaja Udai Singh’s descendants who remain rulers of this independent state.

In the morning, enjoy a drive around Fateh Sagar Lake, which has a garden café on its island. Located nearby are the Folk Museum and Mewar Art Gallery. Although the Folk Museum is small and has been neglected a bit over the years, the unique variety of ethnic groups and cultures of the hills around Udaipur make this visit well worthwhile. Also visit the Sahelion Ki Bari Garden (Garden for the Maids of Honour). This delightful 18th-century retreat in the north of the city was built for the Queen of Udaipur, whose dowry included 48 maids.

Visit the massive City Palace which overlooks Lake Pichola. The City Palace, built in 1725, comprises of 11 palaces, all of which are ornately decorated. You will then walk down the street leading from the gates of the palace to your bus where you will have the opportunity to shop in the local stalls along the way.

Also enjoy a cruise on the 4km long Lake Pichola, fringed with hills, palaces, havelis, ghats and temples. Whilst on the cruise you will see the Lake Palace.

It was once a royal summer retreat and is now one of the world’s greatest hotels. It is also a popular location for film shoots, including James Bond’s Octopussy.

On arrival, you will be met and transferred to your hotel for check in. Enjoy the remainder of your day at leisure before departing India the following day

As the capital of India, Delhi is the third largest city with a population of approximately 18 million. Its strategic location along the north-south, east-west route has given it a focal position in Indian history and many great empires have been ruled from here. The monuments and ruins of these are scattered throughout the city, often cheek by jowl with modern structures and high-rise towers.

Single Supplement of only £665

Book now by getting in touch below! 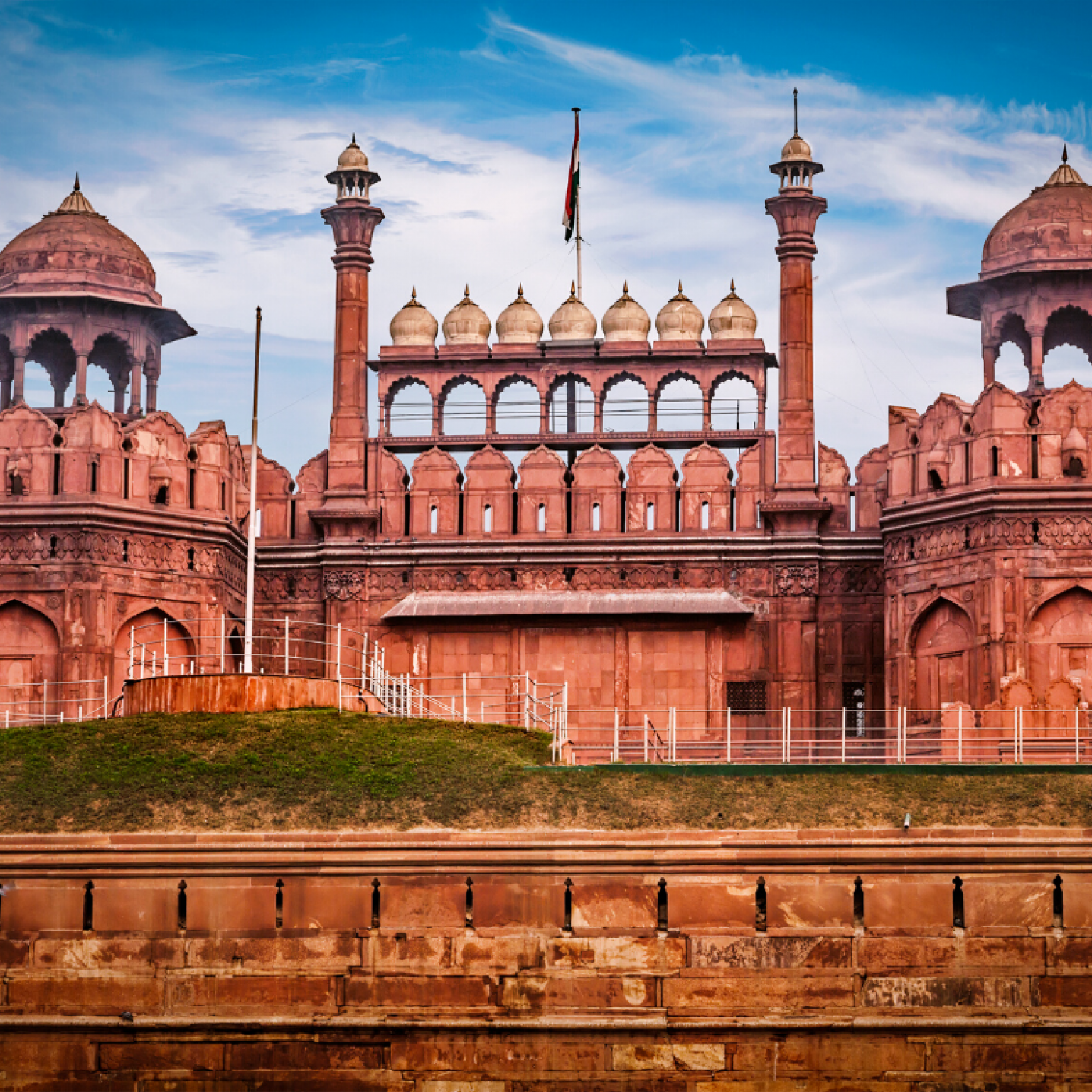 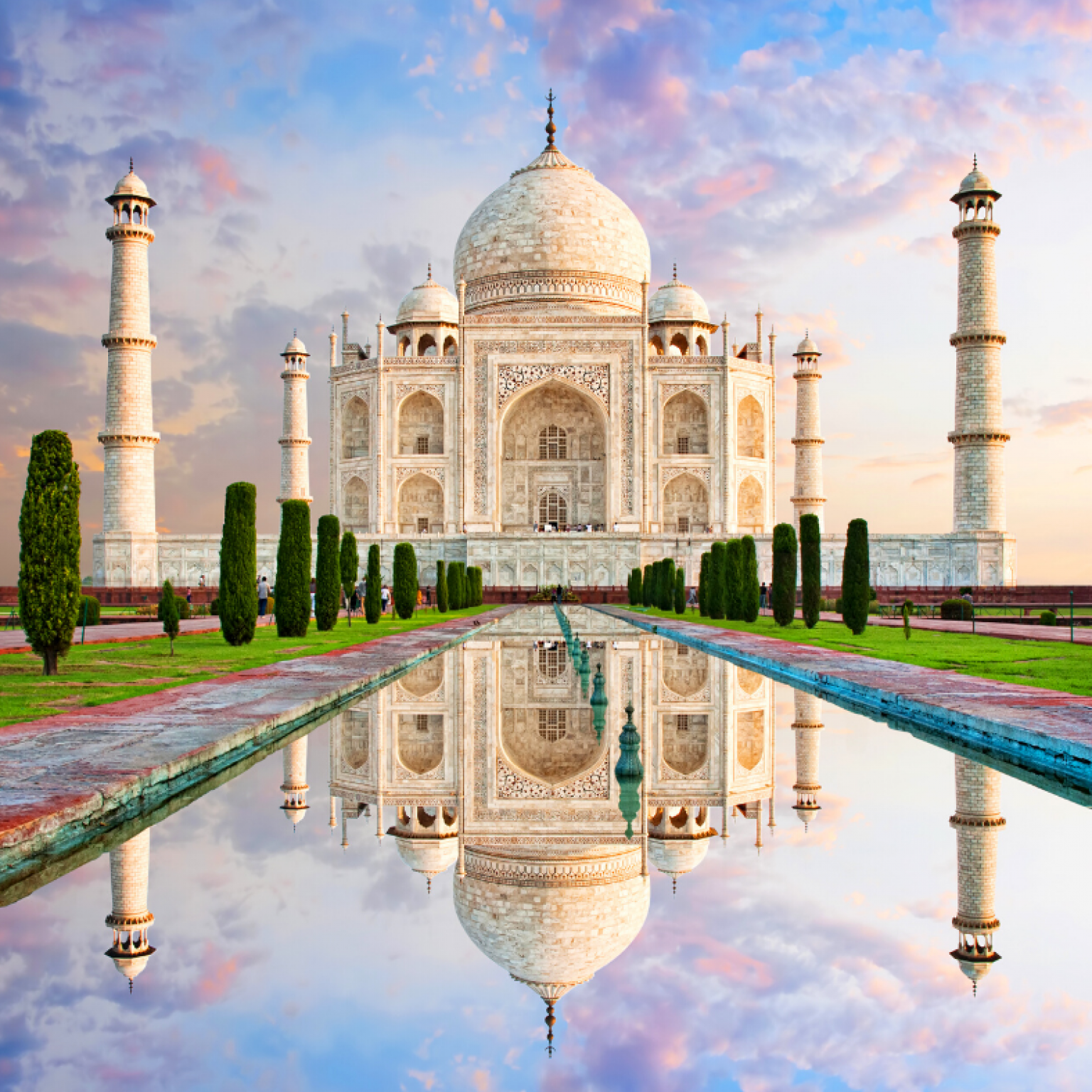 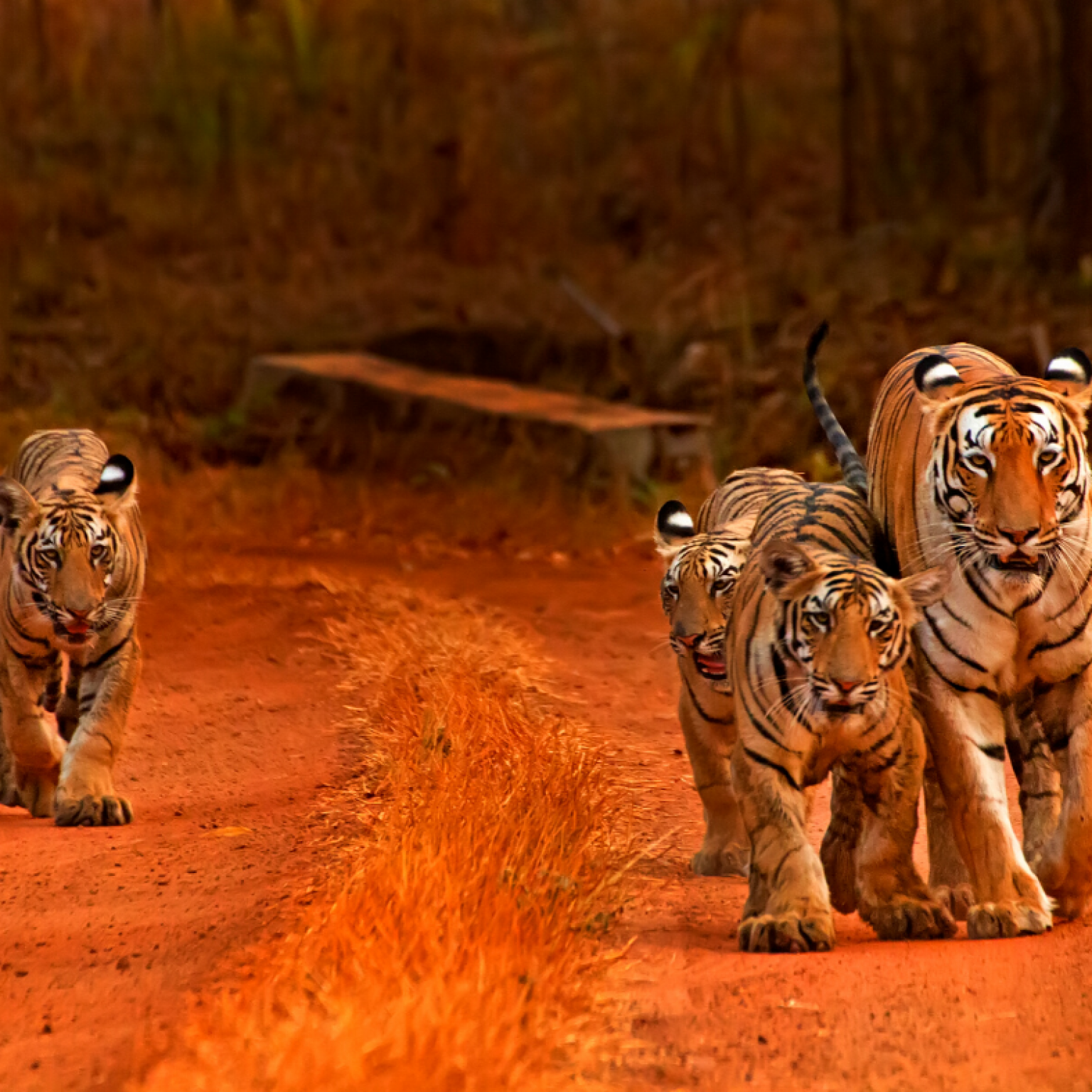